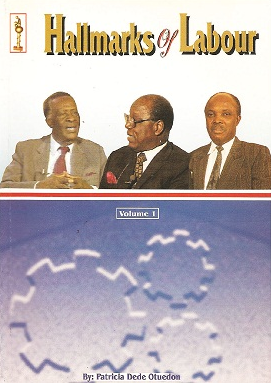 In Nigeria, it is fashionable to believe that the easiest way to achieve wealth and fame is by unlawful and fraudulent practices, and other vices.

However, in spite of this misconception,  Nigeria is a reservoir of people who have successfully recorded enviable achievements in their chosen careers alongside their counterparts in any other part of the world.

“Hallmarks of Labour” is dedicated to these men and women of distinction who, by dint of hard work and moral uprightness, have attained great heights.

Men of high integrity and with the fear of God; long records of meritorious service to humanity.

These are among the role models who exhibit the Hallmarks of Labour.

“This book is dedicated to my lovely daughter, Toritse.

For indeed, it was my strong desire to provide her the platform for a better tomorrow, that triggered my search for Role Models which subsequently gave birth to the Television Series and project, HALLMARKS OF LABOUR”

This book is a textual version of a television programme aimed at
re-orientating Nigerians from a culture of crass materialism and
primitive accumulation to that of respect and honour for integrity,
honesty, industry and commitment to service of the society a\and the
country as a whole. It is an attempt to restore the old values which
developed during the colonial era, and extended to at the very least,
the middle of the seventies, or even to the beginning of the second
Republic in 1979.

Nigeria has had great men who are worthy of emulation, whose records
constitute great inspirations for the present and coming generations.

Our hope for a meaningful future lies in the number of young Nigerians
who are determined to be the Lambos, Oputas and Ayidas of today and
tomorrow. Let us pray that such young men still exist.
Professor I.E. Sagay
Legal Luminary & Reviewer, HALLMARKS OF LABOUR, Volume One, featuring
Professor Adeoye Lambo, Hon. Justice Chukwudifu Oputa and Mr. Allison
Ayida.