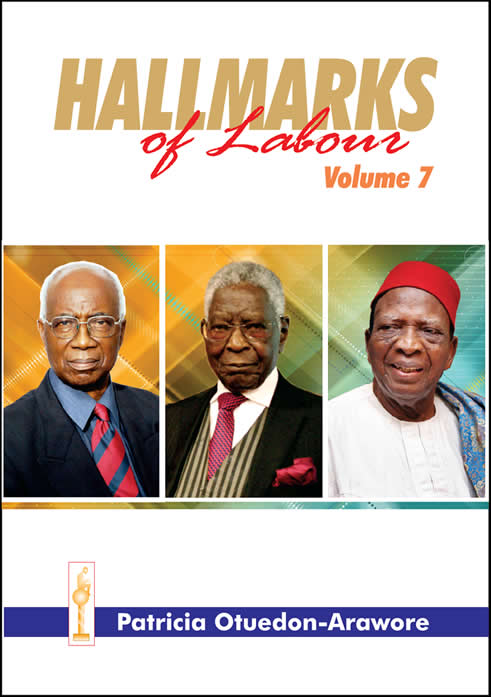 Hallmarks of Labour Volume 7 majorly focuses on the lives, achievements and lessons from three individuals, two eminent jurists and a distinguished Professor of medicine. They are

Hallmarks of Labour Volume 7, written by Patricia Otuedon-Arawore is a 470 page book published by Mahogany Limited, a Publishing Division of Hallmarks of Labour Foundation, 2014. ISBN: 978-36232-0-9. It majorly focuses on the lives, achievements and lessons from three individuals, two eminent jurists and a distinguished Professor of medicine. They are

It is indeed a great honour for me to have been invited by the Hallmarks of Labour team to review Volume 7 of the Hallmarks of
Labour, put together by Patricia Otuedon-Arawore.  At first glance, I was excited but quickly humbled by the calibre of personalities that
this volume has chosen to celebrate.  Imagine being comprehensively introduced to Hon. Justice Obakayode Samuel Eso of blessed memory,
Professor Benjamin Obi Nwabueze and Professor Oladipo Akinkugbe. Indeed, we are in for a great feast of life and times of these special
men of integrity and achievement.

We begin by observing that this is a well edited book of 470 pages, simple in appearance, but beautifully packaged, and reader-friendly.
With this volume the author has once more shown consistency in her exertions at documenting men and women who have achieved distinction
in our society by dint of hard work and uncommon courage and integrity. I cannot, but commend her for this effort. The general
foreword is written by no other than the eminent and cerebral Chief Emeka Anyaoku, CFR, HLR who extolled the virtues of our celebrants.

He observed for example, that Hon. Justice Kayode Eso’s reputation is unblemished among those who have occupied the seats in Nigeria’s
Supreme Court, and that he was universally respected for his courage, integrity and clarity of judgment.

He further noted that Professor Ben Nwabueze is widely acknowledged in Nigeria and beyond as a foremost Constitutional Lawyer and voracious
author of several books on the history and practice of constitutionalism in Africa. Professor Nwabueze it was observed, has been a distinguished law academic in several countries, and has participated in the making of several national constitutions.

Our third role model, Professor Oladipo Olujimi Akinkugbe does not really need any introduction, especially in the field of medicine.
This is a man that became a Professor of Medicine at a very young age of 35, and later became a distinguished University Administrator.

It is therefore clear that the selection of these distinguished individuals as subjects of our exertions in Hallmarks of Labour Volume 7 is merited.

For the author, this Volume is dedicated to two outstanding role models who have passed on, but still live in our hearts and in our aspirations – His Excellency, Ambassador Dr. Matthew Mbu CFR, HLR and Honourable Justice Kayode Eso.

In respect of methodology the author has chosen a rather simple approach of introducing each celebrant with a forward written by a renowned Nigerian, presenting the background and achievements of the role models and drawing lessons from these. And finally presenting a brief overview of the home front. This is simple and practical. However, what was rather laborious is the infusion of several presentations of the celebrants into the book, which I consider an over-kill. This contributed in no small way to the increased size of the book. This does not however take away the insights and lessons that may be derived from the presentations, if one is patient enough to read them. For the future, it may be necessary to include only selected presentations mindful of the overall size of the book.

Hon. Justice Emmanuel Olatunde Ayoola (p.3) wrote the forward on Hon. Justice Kayode Eso.  The author very lucidly documented the
achievements of Hon. Justice Eso.  According to Justice Ayoola, for Justice Eso, justice was a passion.  Justice was a way of life…; it gave him courage where others would have crumbled.  Kayode Eso’s disciplne, reliability and authority were borne out of knowledge, and he poured out wisdom. The forward for Professor Benjamin Obi Nwabueze is written by Professor U.U Uche, while that for Professor Oladipo Akinkugbe was written by H.E Ambassador Kolade, CON.

Hon. Justice Eso was born September 18, 1925 and hails from Ilesha,
Osun State.  It is important to note that his father had ten wives, in
other words, he came from a polygamous family.  If this does not make
one wise, what will?  Obakayode was a name given to our role model by
his grandfather, and he was superintended by a strict father who
instilled discipline in him.  As of necessity, he received training in
farm work and trading.  Hon. Justice Eso had a father who detested
discrimination in any form, and this rubbed off on his son.

Hon. Justice Eso was an exceptionally bright student, coming first
several times in his class from his primary to secondary education.
Justice Eso was influenced by seasoned lawyers like Eusibeus James
Alexander Taylor, R.A. Fani-Kayode, F.R.A. Williams and G.B.A Coker
amongst others.

Although he adored the legal profession, young Eso had a short stint
as a teacher while saving for his travel abroad, to Ireland.  In
short, Hon. Justice Eso obtained his Bachelor of Laws degree in June
1953, Moderatorship (B.A Hons. Degree) in Legal Science, in October
1953, called to the English Bar, November 1954 and enrolled as a
Solicitor and Advocate of the Supreme Court of Nigeria in December of
1954.

It is important to note that upon his return to Nigeria after his
5-year studies abroad with several degrees, Hon. Justice Kayode Eso
set up practice in Jos, where he met other legal practitioners like
Lawrence Odiatu Victor Anazonwu, Godfrey Charles Ubaka Agbakoba
(father of Olisa Agbakoba SAN) and many others.

Apart from having a successful legal practice spanning several years,
Kayode Eso developed good contacts in the course of his practice with
people like Mohammed Bello (later Chief Justice of Nigeria), Mamman
Nasir (later, a Justice of the Supreme Court of Appeal) and others.

He had a short stint in the then External Affairs (lasting only a few
days), and the Western Nigeria Public Service.  As Acting Judge of
Western Region, he was appointed based purely on recommendation and
merit by the Lord Chief Justice C.J. Morgan.  This is a lesson for us,
considering what we all know obtains today.

More importantly, Justice Eso had a baptism of fire as the new Acting
Judge of the Western Region when his first case involved the
playwright and university teacher, Wole Soyinka, who had been accused
of robbery (allegedly invading the premises of the broadcasting House
at Ibadan.)  He was pressured by the political class to convict him,
but Justice Eso stood his ground, thereby allowing himself the
necessary space and freedom to give judgment based on facts, equity
and justice.  His reputation as an impartial Judge soared.  The
accused was discharged and acquitted.

Justice Eso’s predisposition to duty could be summarized as diligence,
prompt attendance at sessions and gentlemanly conduct.  To be in his
court, you have to key into these qualities.  Justice Eso’s
appointment to the Supreme Court (JSC) of Nigeria followed the same
pattern, (no lobby, and no pre-knowledge) as his earlier appointments
to the High Court and the Western State Court of Appeal.

Important landmark cases involving Hon. Eso include the Soyinka Case
just mentioned, the “Twelve-Two Thirds” case, in which he delivered a
minority judgement rejecting the ‘Twelve-Two Thirds’ interpretation of
the Presidential elections results during the Second Republic.

Speaking on leadership, Hon. Justice Eso stated that the first quality
of leadership is to be enamoured by essence and selflessness.  It is
to serve not counting the cost, and to be committed to the truth unto
death. This is really a very strong assertion, but Hon Justice Eso
stood by these all through his years. In short, Hon. Justice Eso had
profound views and on subjects like the Rule of Law, Leadership,
Democracy and Corruption, Checks and Balances, the character of our
previous Constitutions, religion and the secular state. He also
espoused wisdom in international law and international relations,
dissecting the link between peace and war.  He also delved into the
matter of ethics in business and the professions.  For him, ethics is
the performance of excellence, doing the right thing, by the right
person, at the right time, be it in his business, profession or even
in ordinary life.

Volume 7 of Hallmarks of Labour also comprehensively documented
testimonies about the person and achievements of Justice Kayode Eso –
from several eminent personalities that include H.E. President
Goodluck Jonathan, GCFR on Justice Eso’s 85th Birthday, as well as
Chief Olusegun Obasanjo, GCFR as President and Commander-in-Chief,
Federal Republic of Nigeria, in 1999.

As a family man, Justice Kayode Eso was happily married for some 58
years to Mrs. Helena Aina Eso and had two children.

We can conclude about the person and lessons from Hon. Justice Kayode
Eso by taking excerpts from the tribute given by Chief Wole Olanipekun
SAN about him.

“……….. He was one of the most profound and gifted lawyers the Judges
ever produced by the Common Law Jurisdictions worldwide. He dominated
his time and age.  He reasoned tall and expressed himself robustly.
Justice Eso was incorruptible and rose above reproaches.  He was a
mentor and role model to most of us.  A big vacuum has been created in
the legal firmament and I have serious doubts if there would ever be
another Kayode Eso.”

I move quickly to the second segment of the book on Professor Benjamin
Obi Nwabueze NNOM, CON, SAN, FNIALS, HLR.  This book very
well-articulated who Professor Nwabueze is – as a profound
intellectual mind that interrogated and diagnosed the far recesses of
law, and left for posterity vast wealth of knowledge that can last
several centuries. In very quick succession between 1963 and 1983, he
had published nine legal books that stood him out as a distinguished
academic colossus earning him local and international recognition.
Some of his well-known classics include The Machinery of Justice in
Nigeria 1963), Constitutional Law of the Nigeria Republic (1964) and
the Constitutionalism in the Emergent States (1973).