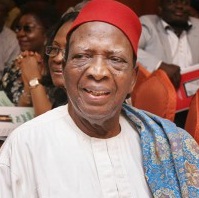 Although, well supported by both father and uncle initially, the greater part of his Academic pursuits abroad were made possible by scholarship awarded to him for his academic excellence.

Prof. Nwabueze earned his Doctor of Laws (LL.D) at the University of London in 1978, based on his three outstanding books – Constitutionalism, Presidentialism, and Judicialism, thus entering the record books as the second (since the death of Dr. T.O. Elias), the only Nigerian and African holder of a higher doctorate degree in Law by published works.
He is also the first academic lawyer to be made a Senior Advocate of Nigeria (SAN) in 1978 strictly on the basis of his published works.

A seasoned Academician, he was member of Senate of the Universities of Lagos, Dar-es-salaam, Nairobi, Haile Selassie in Ethiopia, Lesotho, Botswana and Swaziland between 1971 – 1978.

He was appointed the University Assessor for Academic Appointments, Universities of Ghana, Lagos, Ife (now Obafemi Awolowo University)   and Jos between 1978 – 1979.

He has written over 200 articles in academic journals and more than 100 keynotes at local and international Conferences.

He is a household name in the Legal Profession and hardly, any other author is as frequently quoted in court judgements as Ben Nwabueze. Although, well known for his teaching, research and writing; Nwabueze continued to participate in University administration.

Prof. Ben Nwabueze is also a strong advocate for the Igbo cause. He, alongside other prominent Igbo sons like Akanu Ibiam, M.I. Okpara, K.O. Mbadiwe, Chief Ugochukwu, P.N. Okigbo and Udoji, co-founded Ohaneze Ndigbo in 1976. He served as Secretary – General, between 1978 to 2004, in which capacity he transformed the body into a formidable, highly regarded non-partisan Pan Igbo pressure group.

The recipient of several Chieftaincy titles, and The Nigerian Order of Merit (NNOM).

Prof. Ben Nwabueze is truly an academic giant in every sense of the term. Probably, more than any other Nigerian has, through his numerous books and articles contributed towards the application of constitutional law and the broader process of governance in Nigeria.

Indeed, the Nigerian Constitutional Evolution and the evolution of the entire legal system of Nigeria would not be complete without the invaluable contribution of this noble Patriot. It is therefore in recognition of his immense contribution to the advancement of the Nigerian Legal System, particularly in the areas of Academics and publication that Hallmarks of Labour Foundation has called on Prof. Ben Nwabueze, a Great Nigerian to join the league of other worthy Patriots of Hallmarks of Labour Role Model recipients (HLR).