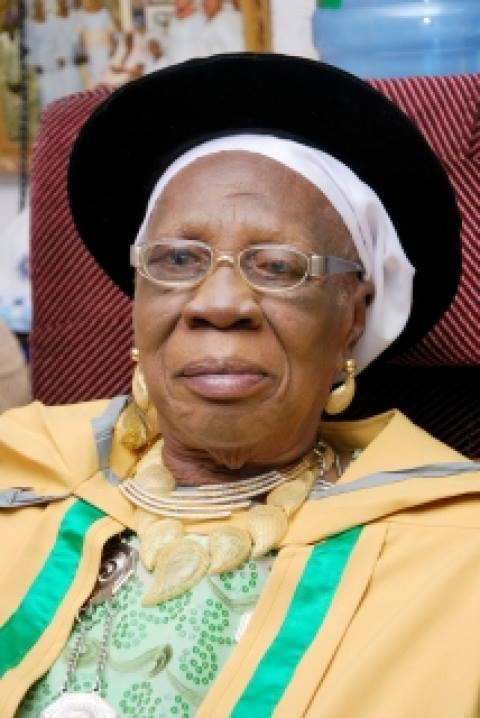 Alhaja (Chief) Abibat Mogaji the Iya Oloja of Lagos and Yeye Oba of Ikirun. Alhaja Asabi Alaba Abibat Mogaji was born on October 23rd 1916 into the famous highly respectable Mogaji family in Ita Agarawu, situated in the heart of central Lagos and as if to prepare her for the role she was to play later in life providence made sure she was born into a family of traders.

Her father late Pa Gbadamosi Mogaji was a produce merchant, while her mother late Alhaja Saadatu Akoya Mogaji, was also a renowned trader in the old Lagos.

Alhaja Abibat Mogaji enjoyed very good health in her childhood with her ever caring mother attending to her every medical need and even suckling her to the age of 31/2 years, a lesson to young mothers of today.

Considering the towering image of Alhaja Mogaji among not only traders, but also among politicians and women leaders through out Nigeria, one would be tempted to conclude that she acquired top level western education but not so. Ratehr Alhaja Abibat Mogaji had a decent traditional informal oral education backed by Quranic school that taough her tenets of honesty, kindness and hardwork principles that have guided her life till date.

Just like her talent for singing and dancing, Alhaji Mogaji’s love for buying and selling became manifest in her, quite early in life. She engaged herself in the making and selling of akara, which became very popular in areas like Iga Iduaran, Igbosere, Onike, Marina, Lafiaji and Obalende.

As time progressed, Abibat’s mother recognised her entrepreneurial skills and encouraged her by laying financial base for her own small scale business. She later engaged in selling Siera Leonan mats and with time she came to grips with the intricacies of commercial enterprise.
Also of importance in her life was the late Chief Obafemi Awolowo who together with other prominent Yorubas’ formed Egbe Omo Oduduwa in the late 40s, this later metamorphosed into Action Group. So close was she to these political role models that she herself became a voice to be reckoned with Under Herbert Macaulay she was active in the Nigerian National Democratic Party NNDP. Under Chief Awolowo she became the arrow head of the mobilization of women, a part she has continued to play in the successive political parties of the Awo philosophy-the Unity Party of Nigeria, (UPN) the Social Democratic Party (SDP) and the current Alliance for Democracy (AD).

Alhaja Abibat Mogaji has many children among whom are Mrs. Biodun Kasumu and Senator Bola Tinubu, the Executive Governor of Lagos State with several grand children.