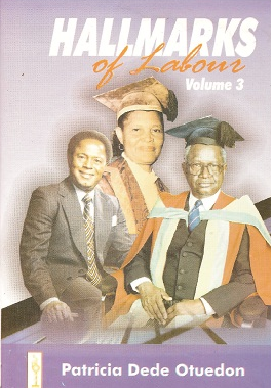 With this third volume, the publication series “HALLMARKS OF LABOUR” has indeed come to stay.

in a system that hardly gives credit to meaningful achievers, it is difficult to sustain this kind of project. Happily, the author-encouraged by people who believe in her dream-has remained undaunted in her mission to extol merit and to give honour to whom it is due in our society.

This volume features a very distinguished woman and two other eminent personalities easily acknowledged as nation builders and role models:

Their stories are inspiring and enriching……..

“This publication is dedicated to the most wonderful parents in the world:

The Hallmarks of Labour books, should be viewed from two standpoints, viz
(i)     as a novel initiative in the development of a culture of true
hereoship in Nigeria;
(ii)    as a biographical effort.
Perhaps, some brief comments on the title of the series, Hallmarks of
Labour, might not be out of place as a start. The combination of the
two words in the title, “hallmarks” and “labour”, has a significant
connotation. Labour means simply work while hallmarks connotes a stamp
of quality or approved standards. The two words combined as in the
title of the book mean therefore work characterized by a certain
measured quality or standard.
In itself and viewed in a generalized sense, work has an inherent
value and importance, because, as declared in the constitutions of
four African countries, it is “a means to development” (Central
African Republic); it is “essential to the dignity of man and the
prosperity of the country” (Madagascar); it is a means through which
“man develops his creative capacity to enrich the Nation for social
well-being” (Equatorial Guinea); and because it is “the source of
wealth or property in the community, the foundation of prosperity for
the people and the barometer for humanhood’ (Tanzania).
Used in conjunction with the word “hallmarks”, work here has a special
reference to work characterized by service to one’s local community,
country and humanity; to work marked by exemplary conduct in life; to
work in a career distinguished by a principled approach to issues, by
integrity, honour, self-discipline, justice, public-spiritedness,
commitment, devotion, patriotism, etc.  These are the qualities, the
standards and the attributes connoted by the term “hallmarks of
labour”.  And it is by reference to them that the acceptability or
otherwise of the author’s choice of the three individuals featured in
this volume as heroes is to be determined.

THE BOOK AS A NOVEL INITIATIVE IN THE DEVELOPMENT OF A CULTURE OF HEROSHIP
Hallmarks of Labour must be acclaimed a worthy initiative in the
development of a culture of heroship so lamentably lacking in Nigeria.
For this, the author, Patricia Dede Otuedon-Arawore, and the Hallmarks
of Labour Foundation deserve our hand-clapping. For, without a culture
of heroship manifested in statues of its great men and women, in
praise songs, in streets, buildings, airports, etc named after them,
in books chronicling their work, ideas and achievements; in television
programmes portraying aspects of their private and public life; and in
other honorific forms commemorating their life and times, a nation is
doomed to stagnation in heroic acts and services. The greatness of a
nation is measured primarily by the heroic achievements, by the noble
qualities, of its citizens. A national culture of heroship serves to
inspire its youths to aspire to be like their elders whose heroic
achievement and noble qualities are recognized and honoured in the
ways mentioned above.
Without this, the nation may become just a society of self-seeking
individuals and money-grabbers, a society in which social values and
worthiness are determined by money and other such mundane things. That
is, regrettably, part of the tragedy of the Nigerian nation.
Along with these, we, as individuals, must learn to worship our heroes
and heroines. It is no blasphemy to do so. Hero worship is an
essential element in the development of the culture of heroship.
In a country like Nigeria endowed with so many talented people who
have distinguished themselves in nearly every field of human
endeavour, it is no easy task to choose three to feature as heroes and
heroines in a book. But I make bold to say that Patricia Arawore and
the Hallmarks of Labour Foundation have presented us with a list that
cannot be faulted, a list of which any popular opinion poll will
overwhelmingly, if not unanimously, approve.
I, for my part, will score them over 80 per cent on the criteria of
dedicated service to Nigeria and humanity, exemplary conduct,
integrity, honour, self-discipline, fair-mindedness,
public-spiritedness, patriotism, principled approach to issues and on
any other relevant criteria. All of them stand out easily as among the
best of the best, among the finest, the noblest and the purest Nigeria
can boast of. We salute them. We should applaud the Hallmarks of
Labour Foundation for its decision not to feature in these series “men
and women of the moment”, that is to say, serving public-office
holders, particularly serving political office-holders. The novel and
laudable initiative of the Foundation must be insulated resolutely
from the all-pervading propensity to pervert all institutions and
standards, which has grown to such alarming proportions as to have
become a national malaise. It is nothing but sheer discretion of
civilized standards and practice in such matters for political public
office-holders to award national honours to themselves whilst still in
office, and within a year or two of their election, thereby
constituting themselves judges and assessors of their own performance
in office. Apart from Nigeria, I know of no other democratic country
in the world where such flagrant abuse of office is committed and
committed so brazenly and so unabashedly.
THE BOOK AS A BIOGRAPHIC EFFORT
It is scarcely correct to say that “this is not a biographical
series”. Whilst, admittedly, the series is not a biography of the
conventional type, it is certainly a form of biography, albeit one in
a condensed form, which requires skills, techniques and insight of a
special kind. The author would profit a lot from reading Putarch, (c.
46 A.D.- C.120), the greatest biographer and chronicler of all times,
whose The Lives of the Noble Grecians and Romans – Parallel Lives, as
it is usually cited – (see Encyclopaedia Britannica Inc. edn 1952),
with its “vivid narrative, the exciting episodes, the fascinating
anecdotes, the wise comments, the noble style”, has been described as
the most precious book left to us by ancient Greece. By pairing and
comparing great Romans with great Greeks, Plutarch was able to “pass
on some moral stimulus, some heroic impulse, to his readers.”
Patricia may well become Nigeria’s Plutarch, so that, like him, she
can “pass on some moral stimulus, some heroic impulse,” to her
readers.
Professor Ben Nwabueze