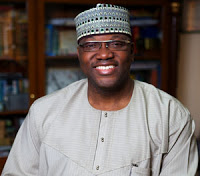 Prior to starting Channels Television about 25 years ago, John Olatchy Momoh served variously as News Anchor, Senior Reporter & Senior Producer for the Federal Radio Corporation of Nigeria (Radio Nigeria) and the Nigerian Television Authority (NTA). During his illustrious career with these national networks, he distinguished himself by winning several notable laurels which attest to his venerated professional status, some of which were the first Nigerian Media Merit News Anchor of the Year & the Nigerian Union of Journalists Newscaster of the Year.

As Chairman/CEO of Channels Television, John has built the station into a powerhouse and established it as a strong, highly-respected national & international satellite brand-name, which has won several awards over the years. Among others, Channels TV is the first Nigerian broadcast station to be nominated at the International Emmy for the International Children’s Day of Broadcasting Award. The Station is a ten time winner of the Nigeria’s “Television Station of the Year” Award, winner of the African Achievers Awards Trust’s 2014  and Best Television Station in Africa” Award.

It is also the first Nigerian media organization to stream its news and programs live, interface with followers via Twitter and the First Nigerian TV Station to have completed its mobile Apps on various platforms.

An Officer of the Order of the Niger (OON), John Olatchy Momoh is a Fellow of the Nigerian Guild of Editors; Nigerian Institute of Journalism; International Visitor Programme of the US & African Future Leaders. He also holds the Nigerian Information Society’s Life-time Achievement Award.

John Momoh is a Red Cross Ambassador and Patron of a select number of charitable organizations in Nigeria.

He is happily married to Mrs. Olusola Momoh a veteran Broadcaster and the Vice Chairman of Channels Television and are blessed with lovely children.

Ladies and Gentlemen, we proudly invite Mr. John Olatchy Momoh to receive the HLF-Christopher Kolade Award for Excellence in Leadership and Professionalism in the Media.