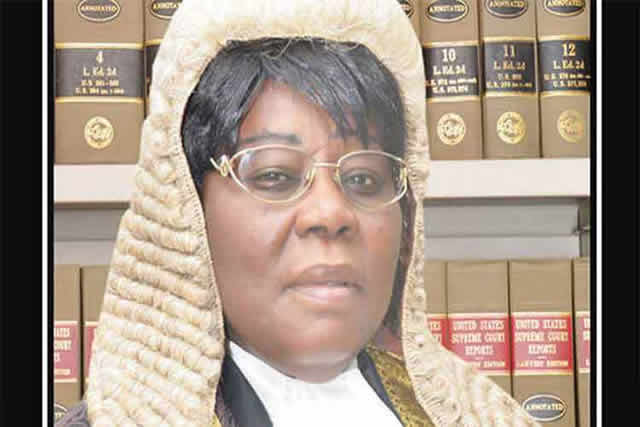 A legal icon and in the vanguard of human, especially gender rights, Honourable Justice Clara Bata Ogunbiyi has had a distinguished career in the Nigerian judiciary.

Born on February 27, 1948 in Lassa, in today’s Borno State of Nigeria, she was a pioneer student of Government Girls’ College, Dallah-Kano; and successively obtained a Diploma and Bachleor’s degree in Law from Ahmadu Bello University, Zaria as well as a post-graduate degree in Criminology at the University of Hull, United Kingdom.

She commenced her judicial career as a State Counsel with the Borno State Ministry of Justice; and progressed to the rank of Director of Civil Litigations in December 1984.

Two calendar years later — in January 1987 – Clara Bata Ogunbiyi was appointed a High Court Judge of Borno State Judiciary – registering her as the first female Judge from the North-East zone of Nigeria. In 2002, she took a giant leap to the Federal Judiciary with her appointment as a Justice of the Court of Appeal. The icing on her career cake came with her further elevation to the apex court in the land – the Supreme Court of Nigeria – in 2012; making her the fourth female overall and first from the North-East zone to be so appointed.

She retired from full-time public service at the mandatory age of 70 years in 2018.

In her judicial career spanning some four decades, Honourable Justice Clara Bata Ogunbiyi interpreted the Law as an instrument of social equity and fair-play; in pursuit of fundamental rights in line with the Constitution. At the Supreme Court alone, Her Lordship wrote about 200 Judgements – 90 lead judgments and 110 contributory; her 10-year service at the Court of Appeal recording far more judgements.

Among her celebrated cases is Onyibor Anekwe v. Mrs. Maria Nweke; the latter a widow with seven female children who had been driven out of her husband’s home on supposed customary ground that she could not inherit family landed property as she had no male children. At the Supreme Court where Justice Clara Ogunbiyi delivered the lead judgment, she declared courageously that any custom that denied women their rights to inheritance of their late husband’s estate on the ground that they had no male children was unconstitutional and repugnant to natural justice, equity and good conscience. Also in Ukeje v. Ukeje, Justice Clara Ogunbiyi pulled the judicial trigger on a custom that disinherited children born out of wedlock from sharing of their father’s estate. The erudite jurist had noted that such native law and custom were unconstitutional.

Indeed, her Judgements have greatly enriched Nigeria’s case law and judicial history; resolving several grey areas of the laws of the land.

Ladies & Gentlemen, we are proud to invite Her Lordship, Honourable Justice Clara Bata Ogunbiyi to receive the HLF Award for Exemplary/Courageous Service to our Judicial System.