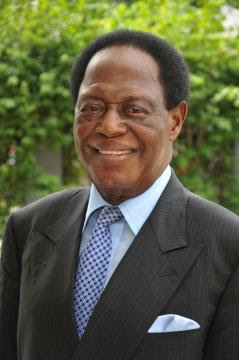 This man with so many firsts recorded to his name is no other than Dr. Mathew Taiwo Mbu fondly known as M T Mbu. He is not only the Nigerian pioneer Diplomat, he also holds the record for being the youngest ever diplomat  and minister, as he was only twenty three years old when he was appointed Federal Minister of Labour  in 1953. Chief Dr MT Mbu who is a lawyer, politician and Diplomat was born in Okondi Ogoja Cross rivers state on 20th November 1929, he attended Okondi Primary School from 1937 to 1940 in Ogoja where as a young school boy, he was so impressed by his teacher Rev. Patrick Mia that his all consuming ambition was to train and be ordained a catholic priest, this was in sharp conflict with his father’s plan for him to become a lawyer. Dr M. T. Mbu then went ahead with his education through Raisen hall Oxford University College London. Before proceeding to London however, Dr. MT Mbu had already become a prosperous business man and politician even in his early twenties. He was a member of the federal house of representatives- representing his constituency under the NCNC, he had also become federal minister of labour 1953 and acting minister of  transport 1954, acting minister of commerce and industry 1954 and acting minister of works 1955.

This attribute along with his level headedness and his ability always to strike a balance on issues earned him the choice over and above his other colleagues as Nigeria’s first convoy to the court of St. James London. He had a successful career in London while at the same time pursuing his law studies becoming a barrister at law of the honourable society   of the middle temple in 1959.He later added to this OAM, PHD and beginner in international affairs. Back in Nigeria, DR. Mbu scored another first as First Minister of Defence, Navy 1961-1965.