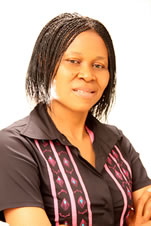 Dr. Mrs. Josephine Joe Obiajulu Okei-Odumakin was born in Zaria on July 4, 1966. She obtained most of her formal education in Ilorin. She holds the Bachelor of Education [English], Master of education [Guidance & Counselling] and Ph.D. [History and Policy of Education].  Rather than tow the path of a comfortable career in academics or administration, Dr. Joe Okei-Odumakin developed a strong interest in and concern for increasing human rights violations in Nigeria and around the world. Over the last two and a half decades, she has traversed with great courage where most men dread to tread.

Her active involvement in civil society has taken her through critical assignments among which are Assistant General Secretary, General Secretary & President of the Campaign for Democracy [CD] successively since 2006.

A courageous fighter, Dr. Okei-Odumakin’s consistent challenge against human rights abuses has exposed her to harrowing experiences under the most repressive regimes Nigeria has ever witnessed. Among other travails, she has been shot in the leg by security agents and undergone close to 20 detention stints in unsavoury conditions in Lagos, Ilorin and Abuja. In 1994, she was accosted by the police and beaten almost to the point of death and later detained for pasting posters against the then military regime. Later that year, while addressing a rally, she sustained serious injuries as she was seized by soldiers, beaten, kicked several times and thrown into the gutter before being imprisoned. Undaunted and unbowed, she has progressively become a strong voice to be reckoned with and her image engraved on the Nigerian civil rights movement.

Dr. Joe Okei-Odumakin’s value-added roles in the pursuit of democracy, good governance and national development are recognized and acknowledged locally and internationally amongst which are:

n  Ambassador of Goodwill for USA State of Arkansas to the people of nations beyond the USA.

According to a former US Ambassador to Nigeria, Dr. Walter Carrington, “she is  a fearless, fiery champion of democracy and human rights” ; even as our own Nobel Laureate, Professor Wole Soyinka is right on target as he declared her to be “A tireless fighter whose frail bearing belies an inner strength and resilience … a veteran of affirmative marches, of crude arrests and detentions, baton charges and tear gas who has lent lustre to the struggle for justice and human dignity, who remains an inspiration of men and women, old and young”.

On March 8, 2013, Dr. Joe Okei-Odumakin put Nigeria on centre stage when she was honoured with the US Secretary of State’s International Women of Courage Award, along with nine other recipients across the world. The ceremony was conducted by the US Secretary of State, Senator John Kerry and US First Lady, Mrs. Mitchelle Obama. The award is given to phenomenal women who have demonstrated exceptional courage and leadership in advocacy for human rights and women empowerment — often at great personal risk.

Dr. Joe Okei-Odumakin is happily married with children to Dr. Yinka Odumakin whom she met in detention.

Ladies & gentlemen, we present to you, Dr. Josephine Obiajulu Okei-Odumakin, a woman of courage, a tireless defender of democracy and human rights to accept the “HLF-Gani Fahwehinmi Life-Time Achievement Award as a Consistent Advocate for Human Rights and Civil Liberties in Nigeria”.